Last week I spent my first Saturday in a very long time, housebound and alone. I had intentionally declined all social offers in a bid to go through cupboards, sort out paperwork and relax somehow. I wanted something quiet, with plenty of food and lots of rest. Despite everything going to plan, I felt tremendously lonely and restless.

Usually I would fill my weekend gaps with the pleasure of outside company, so on this particular day I found myself struggling to just be. Why am I not enjoying my OWN company? Do I not feel good enough to be with myself? Why do I feel like I’m missing out by staying in? These were the questions asked myself based on the unshakeable boredom of ‘being with self’.

It had never been a plan of mine to live alone; the thought seemed unimaginable due to a constant desire to “self-surround”. As someone who is generally anxious, I’ve found much comfort in having somebody – anybody – by my side. I grew up in an open home where our front door was – literally – kept open. Friends were constantly in and out, sharing our food, time and space. My mum longed for privacy, which was impossible as my dad worked from home and welcomed an influx of visitors. Needless to say when my parents divorced (by this time we’d moved into an even bigger house), there was no holding back from a slew of open invites.

I became much like my dad in nature, developing into a person who was rarely alone. This was wonderful as my interaction was constant and my moments never dull. I didn’t have time to think or dwell, I could just live in the moment. Entertained by characters (the quirkier the better), I enjoyed the buzz of having a variety of peers distracting me; the feeling of a full house left me with a full heart. It was an unconventional upbringing, in the sense that my family rarely had much privacy.

I had a more “normal” living experience with my mum: eating ’round the table as a family, keeping sleepovers to weekends, adhering to parental boundaries, having someone overlook my homework etc. It didn’t matter though, by the time I turned 17 she caved and we would host around 6-7 girls within her tiny apartment; a quaint escape for rebellious girls.

From 23 onwards I lived with different friends, which seemed like the most sensible thing to do. Movie nights, afterwork drinks and house gatherings were few of the wonderful things to come. When I eventually did make the decision to live alone, my intuition screamed fear. How on earth would I cope without having someone around? More importantly, would I be able to make a friend out of myself? Would I be able to fill a void I didn’t even know was there?

The first thing I did when I moved into my private little space, was make the place MINE. Having complete control over the decor, colour theme and even pictures on the wall enabled me to mark my own territory. I no longer had to keep things neutral by sharing a space. Surprisingly, unlike any other place I’ve ever lived, I felt right at home from the very first night. This was because I was in a space which felt familiar and personal. It was mine. 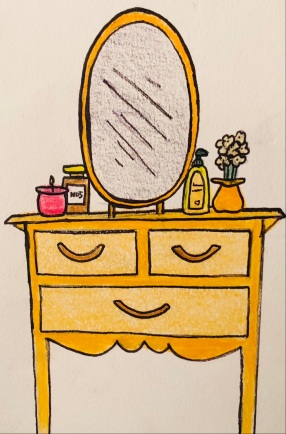 The second wonderful thing I became aware of living alone, was having complete freedom. It didn’t matter if it was 1am or 6am, I could have whoever I wanted, whenever I wanted, for as long as I wanted, over! That in itself was essential to my personal growth; I needed to be the dictator of my own private space.

That rare Saturday, upon reflection, I realised how unappreciative I was. Having a place of my own, a safe haven, was the ultimate privilege. In the end, I watched a couple films, slapped on a face-mask and finally revelled in my own company!

Sometimes when I’m alone, I get out “The Family Box”: a box I keep stashed full of old pictures and letters. These are the moments I truly reflect. I become nostalgic and reconnect with my past, mind-blown by how much things have changed (though the love I feel is constant).

I intentionally waited a year to write this piece, because I wanted to see if there would be a transition from the time I moved in until now. I think due to constantly being surrounded by people as a child, I never felt secure in my own company. I would put people’s demands before my own; too scared to offend or seem demanding.

Living alone has allowed me to be selfish, to make my own rules and dominate my own space. One day, when the time comes and I choose to live with others, I’ll be able to communicate self-assuredly, considering others without forgetting myself. Until that time, I’ll be basking in the gift of self, meeting my own needs and feeling not an ounce of guilt for it.

One thought on “Queen of My Castle”