So, I recently had my End of Year Work Report, (where management review employee wins and focus areas) and was most pleased. Not because I nailed the review, but because my newfound ability to implement boundaries and give feedback was acknowledged. Admittedly, these are areas I’ve struggled with my whole life (both work-wise and personally) and I felt a surge of relief knowing I’m finally asserting myself.

I turned 30 in October and by sheer coincidence, have since said “NO” more times than I have my entire life. BOUNDARIES: nothing “mean” about their implementation, merely a protective shield from inexcusable and/or unwanted behaviour. Saying “no” has been a great way for me to exert my own personal boundaries, even that it’s taken me years to get there.

My first significant “NO” occurred around 5 years ago, when I was attacked at work by a wild beast dressed in a security uniform.

2015. I’d started a new job in a prestigious, high-end company and was stoked; naive, bright-eyed and full of enthusiasm. My role was Front of House which was perfect at the time: a foot in the door, an opportunity to network, acquire new skills and observe. I was working with two males: our Security Guard and Security Supervisor. The first two weeks were awesome, the guys were friendly and laid back, we’d banter in our free time and I felt I’d landed on my feet. 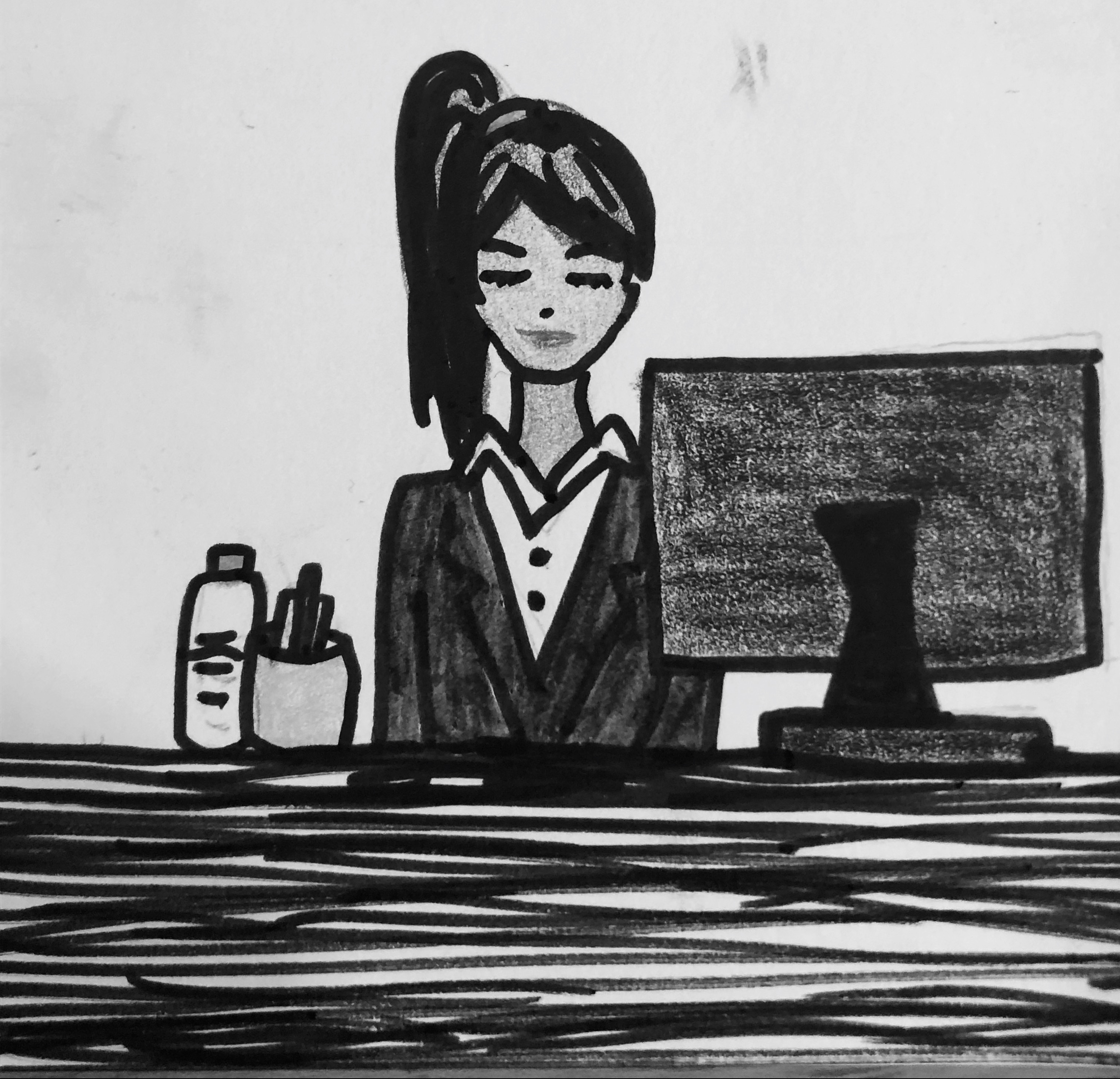 Unfortunately, the two-week honeymoon period ended abruptly. Our Security Guard Shane*, began to exhibit what I can only describe as obscene behaviour. In hindsight, he’d probably used the first two weeks to suss me out: could I take a joke, did I enjoy being negged; had I built up rapport with management (who unfortunately, were based overseas).

Having management elsewhere initially seemed advantageous (we were third party contractors which meant nobody onsite micro-managed or monitored us). It was just the three of us, building our own trust-filled dynamic and getting shit done. One big happy family!

There’s no polite way to mask this, but Shane became unhinged. He did everything he could to get my attention: commenting my physique, invading my space and “punishing” me with silence when his advances weren’t reciprocated. As soon as he started acting up, it was a downhill spiral. He became more and more aggressive in his approach, which shocked me into “enabler-mode”. Our Supervisor turned a blind eye, making ridiculous comments such as “Oh you two are like a married couple” or “At it again are ya?” Nah pal, you’re just complicit to bad behaviour.

Most days Shane would punch, slap, pull and even pinch me. All in “jest” of course, but when asked to stop he would carry on. It was bile-inducing.

On one occasion he began to rub my elbow and when I moved my arm said “Did you move your arm from me?!” “Well yeah”. I replied, “You’re invading my personal space”. He continued anyway. Even if I had stapled “DON’T TOUCH ME” across the forehead it wouldn’t have deterred him. He enjoyed asserting himself through unwanted power-play.

That following day, Shane verbally abused me when asked if our clients had arrived. “Did you not hear me say fuck off?” he asked.

I had clearly joined the circus, taking on the role of a miserable clown.

That afternoon, Shane told me to “stop looking miserable” and began massaging my shoulders. Reflexively I shrugged him off but looking back, I should’ve slapped him.

Every day it was something or the other. I developed terrible anxiety going in to work and would come home exhausted. To make matters worse, our so called Supervisor was living on Mars. He acted as though Shane and I were simply “not getting on”, when it was clearly a one sided attack. One day he asked: “If you and Shane weren’t coworkers would you consider going for a drink with him?” What the actual FUCK?! I started to think I was going crazy: have I given the wrong signals? Am I missing something here? What more can I do to get my message across?

I was staying with my mum at the time who’d become equally disturbed. I’d arrive home deflated, or, in her words, “dead behind the eyes”. Together, we began to dissect the Shane saga and she encouraged writing a dated report. Let’s build a case against this fucker! I hated the idea of reporting him. I labeled myself a snitch; a woman who couldn’t handle things herself; too feeble to be feared.

Classic victim mentality: harnessing the blame for a perpetrator who rejects accountability.

Back at work, I was constantly overhearing conversations which revolved around “pussy”, “dick” and “shiners”. The lewd comments were plentiful and very juvenile. Shane would catch me rolling my eyes and say “Awww – you missing that D? Want some D?” It was enough. I opened a google doc and let every bad encounter become my ammunition. If anyone’s “goin’ down” it’s you hun!”

Today Shane ignored me all day regarding work related matters because I didn’t laugh at his  “jokes”. I asked him twice via radio to escort a VIP and was ignored. When asked what happened, he replied: “I ignored you ’cause you can’t take banter. What did you say when you first came for an interview? That you could take banter. So yeah, I’m ignoring you”. I tried to explain that not enjoying his “banter” had no correlation to our work, but he cut me off explaining that “X is X and Y is Y”.

Academic revival at its finest.

11am. Shane is angry because our night staff reported him to management for being rude. He starts threatening our colleague, saying when he sees him outside he’s going to “punch him up”; that what he does outside of work is “no-one’s business”.

Somebody book this guy a course in Anger Management pronto!

5pm. Shane’s off on a nonsensical tangent again. According to him, all women “willingly act as ‘side-chick’ material”. He sparks a ludicrous debate & becomes increasingly aggressive. I challenge his moronic views and am told to “stop jumping on your feminist bullshit”.

Shane ignores me all day for challenging his views the previous day.

6pm and I’ve changed into my gym gear. Shane tells me I should focus on my squats. I call him offensive and he replies “Yes it is offensive, I’m the one who has to look at you. Look at that ass, you should work on it”.

The next morning Shane asks if I’ve done my squats. I ignore him.

[I have now stopped wearing makeup to work].

“When you first started here you used to look much better. You’ve gone downhill. You used to have that vava voom – you’ve let it slip”.

4.17pm. Shane’s ignoring me unless to shout: “POP THE DOORS!” He can see I’ve got a guest blocking my view; that the phone is ringing and he could open them himself using access control.

6.30pm. Shane is sitting by reception in an empty meeting room, lights out, staring straight at me.

Anyone in touch with an Exorcist?

In the end, just an hour before leaving on holiday, my older brother noticed I seemed off. It took him just one glance at my notes to say “Call your manager now. Don’t wait, just do it”. I panicked. Was I really going to cost someone their livelihood? I was still new and Shane, well liked. Regardless, I understood things had gone too far; protecting him was costing my own peace of mind.

And that’s what’s so weird about situations like these. I wasn’t the person violating personal boundaries, yet blamed myself for the result. Life is complicated enough and as an adult, one would expect their place of work to be a haven for safety and respect for all. Not a playground, or a boys club, or a pitch black alleyway at 4am.

In a way, Shane received what he wanted: reciprocated attention. I thought of him constantly, discussed him with friends and gave him power over my feelings.

I dread to think how far it could have gone.

My manager at the time, still overseas, was amazing. As I blubbered down the phone he assured I’d done the right thing; that there would be no repercussions.

And he was right. I never saw Shane again.

Looking back, my blood boils when I remember all I’d tolerated. I empathise, but can’t relate to the young girl who let so much slide. If it were to happen again, Shane would be out the door within the space of a day. Still, my experience is what toughened me up in the first place. I’ve learned that even places of profession are filled with predators and sometimes, the system is in cahoots.

If something doesn’t FEEL right, it probably isn’t. Don’t ignore the red flags or that feeling in your gut. Don’t like something? Speak up. Go to the person highest in command and surpass them if you have to. Still no joy? Go to your local newspaper. RESIGN. Other jobs will come and frankly, no cheque is worth more than your sanity.  Observe, build a case and don’t let the predators fuck with you.