It’s been a while but I’ve been thriving, surviving, single and SWIPING.

DATING APPS: what a tragic time to be alive.

You know, every time something remotely unfortunate happens in my *less than impressive* love life – the sensitive, trusting, hopeful girl in me curls in a ball and wants to disappear. The ballsy, no-fucks, abrasive writer on the other hand thinks: I’m so glad he proved to be like all the rest, we about to go innnnn!

Like many other busy, bright and quite frankly AMAZING single women I know, I’ve had a truly unfortunate experience using dating apps. Tinder, Happn, Bumble and best of all – Hinge, are proving to be a fucking waste of my time. I swear, I’d be more likely to develop a meaningful relationship with a bag of frozen carrots than some of the men I’ve met.

I’ve been on several dates over the last two years and have many stories to tell: the guy who tried too much too soon, the guy who claimed to be a millionaire and fleeced me; the one who thought he could buy his way into my bed…or the one who thought his bed would make a good spot for a first date. Then there’s the guy who replied every 48 hours ’til I finally got the message; the funny guy – who in person didn’t laugh once and my personal favourite: THE GHOSTER.

Bare with me readers, I’m just warming up.

I met a guy who on paper was….perfect. No, perrrrffffeccctttt. So funny, so normal, so cute, so nice. Clever. Driven. Engaging. Responsive. All of the boxes were like *check* *check* check*. Even my cynical Mother was like: “Darling, this one seems to be matching you. If you fuck it up, you have problems”.

Before our date, we spoke for around three weeks. Messaging in the morning, messaging in the evening. Phone calls, pictures, voicenotes – even the occasional drunk call some nights. We didn’t meet straight away ’cause we were both working; traveling – but it felt like we were on the same page, we were opening up; getting along.

By the time our date came ’round it was nerve-wracking: with online dates you never fully know who’s going to turn up: will they be all you’ve hyped them up to be? Will you be all they’ve hyped YOU up to be?

Well, we met and it was…nice. Were we trying to rip each others clothes off? No (well, never, ’cause that’s not really my pace). But, we spent four hours together which – to spend with a stranger, on a weekday – is a fucking long time. I didn’t feel the way I felt with my exes i.e. “They’re so hot and arrogant – I’m so young and unsure of myself. I’m gonna reapply my concealer every ten minutes and then we’ll be together forever”. Instead, I felt at ease. I felt like – this is a person I can talk to, about everything – and he’s actually listening. This is someone who seems shy and unsure….but he’s got my attention. Am I in love with him? No. Am I in lust with him? No. But there is SOMETHING between us – other than this table – worth exploring.

At the end of our date we kissed. I mean, I didn’t know if we would, or whether I’d even like it. For starters, despite my bravado of being open, outspoken and just a *little bit* crazy…I’m like a snail when it comes to physical intimacy…maybe even a little uptight. It’s the only way I can protect myself: making sure his heart is hooked before he unhooks my bra, know what I’m saying? Well anyway, I was glad he kissed me because I liked kissing him. It confirmed I’d wanna do it again.

We carried on talking as normal after that. Well, for four days to be exact. Slowly though, he started pulling back. Less messages. Fewer replies. It got to the point where we went from speaking every day to not speaking for a week and I thought…he’s gonna gradually fizzle out ’til he feels safe enough to disappear completely.

Now, to most people reading this – you might be thinking – what’s the big deal? Well, I guess there isn’t one, if you’re okay with indirectness, lack of consideration; blowing hot and cold; not knowing where you stand, or wondering what you’ve done wrong.

When you reach out to someone consistently over a chunk of time, they’ll get used to hearing from you. When you open up to them about your life, they’ll feel they can open up about theirs too. Or like, if you say misleading shit to them about the future – you’ll pull them from the present.

Ghosting, is like leading someone up the garden path and pushing them into a well of self doubt.

During that week of silence, I went through all kinds of possibilities:-

Did I have to send him all those pics of my pasta? Did I need to be so “alpha-male” by steering the wheel? Can’t I keep myself small, so that guys like him don’t get scared of my BIG?

Put me out of my misery already. I went against all of my friends advice and messaged him, straight up. His response told me everything I needed to know:

Text 1: He made an excuse, but didn’t even bother to ask how I was doing. Why? Because he didn’t give a fuck. He was too busy feeling sorry for himself after taking ketamine all weekend. Me messaging him simply added to his self-inflicted problems.

Text 2: Again, straight up. I simply wanted that closure so I wouldn’t torture myself with the not-so-fun guessing games. Did he reply? Of course not. He was ghosting.

Despite letting all my mates down by not playing “the cool game”, I am so glad I sent those messages. They set me free from myself, the lights went on.

I believe every woman has that switching point, when we stop giving a fuck about people who don’t give a fuck about us. When we start to reevaluate our relationship with self and realise it’s not even about the guy – it’s about what WE’VE projected onto THEM. I’ve flicked that switch with every man I’ve ever liked or dated, it’s like sobering up from a messy night out and nursing yourself with food and sleep.

Look. If you’ve ever been confused, misled or ghosted – just remember: there are plenty more fish in the sea. That fish you been trying to hook? Set it free into the ocean. Let it get eaten by sharks, or later served on a plate with wasabi.

Just kidding. But think about it: if there are multitudes of sea life in the ocean – don’t be disheartened if you couldn’t reel a tiny fish in. Go for the biggest catch your rod allows and trust me, if your catch doesn’t even hold a *PLAICE* for you? Do you want him in your net?

Socially and culturally we’re urged not to be too honest with men: “Don’t tell him you wanna get married or have kids – he’ll run a mile. “Don’t bring up anything that makes you seem depressed or insecure…it’ll probably be too heavy and he’ll think you’re a psycho. “Play the game by revealing as little about yourself as possible, when he’s finally yours you can show him how crazy you are”.

If you can’t handle me at my: 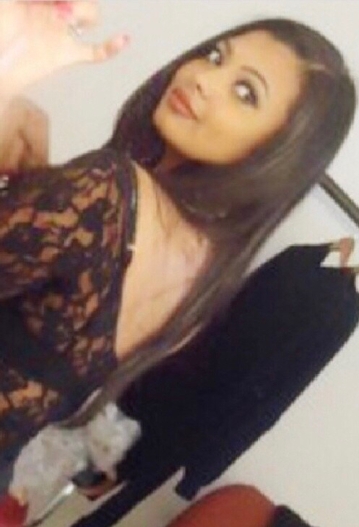 You don’t deserve me at my:

My bad, I didn’t realise I was a puppet in search of an all-male standing ovation.

After being emotionally misled and then ghosted, I took all that great advice and binned it, along with every other guy who’s ever hurt my feelings.

I stopped appeasing online predators, no longer responding to sleazy one-liners with shy emojis, and started showing them my boundaries. 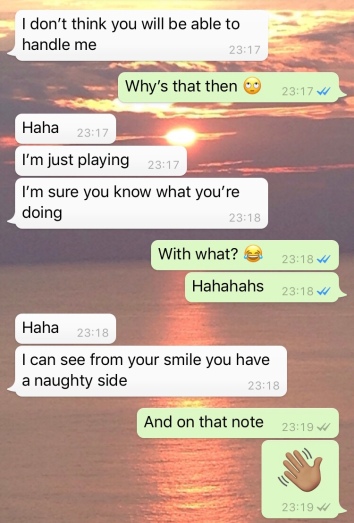 I started turning down dates to guys “only looking for fun”, giving them clear, honest explanations as to why I didn’t wanna date them. 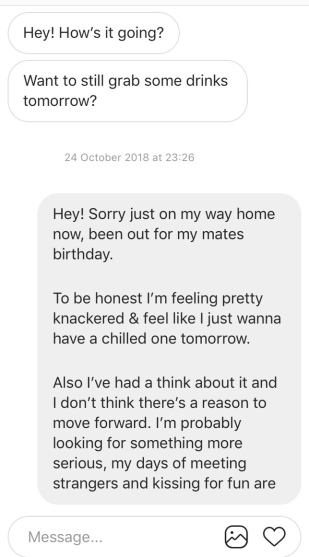 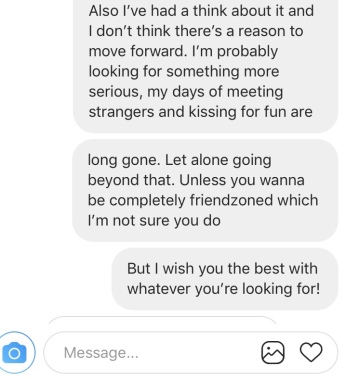 I didn’t realise that being fiends for a chase, such reactions would gage more interest. Typical predators, always seeking a challenge; a conquest. 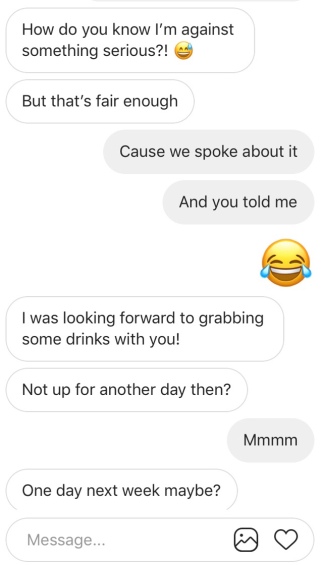 My ghoster did actually reappear – almost a week later. He listed all my favourable attributes to soften the blow of his rejection. He didn’t realise that labels like “pretty”, “funny” and “awesome” were just another way of reinforcing his absence. He ended something before it began, because I was more interesting when I was two-dimensional.

To be honest, it’s not that deep. I was pretty grateful for the honesty, even if I had already given myself closure.

People are different and where “ghosts” are concerned, perhaps he didn’t want to hurt my feelings. Maybe, a ghosts logic is to back out without contact in case they choose to reappear one day. Mayyybeee, a ghost is scared to be seen in a bad light – and thinks that saying nothing is safer than saying something.

If somebody ghosts you: burn some sage and lock that door. Delete their number and any pictures they may have sent, nobody needs to be looking at that shit.

If your worth needs to be validated by anyone other than YOU – maybe it’s time you start giving yourself that much needed love you deserve. Remind yourself how worthy you are and fuck anyone who can’t see you.

Keep in mind that ghosts aren’t real: if they disappear, they were never really there to begin with.